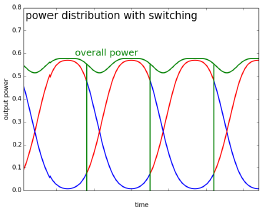 A common problem for HeNe laser customers is the issue of polarization switching, which is the sudden change of the polarization of different modes, especially in shorter tubes, which can be particularly detrimental when operating frequency stabilized HeNe laser tubes. This phenomenon is sometimes referred to as ‘mode hopping.’ However, this is not accurate. While somewhat similar to polarization switching, mode hopping involves (mostly in single-frequency lasers) the laser’s operation on a single resonator mode, which suddenly switches to another mode, causing the optical power to switch over to this new mode. Polarization switching shares this feature of erratic output power. However, with this phenomenon, the output power fluctuations are due to the swapping of the two perpendicularly polarized modes’ polarization states rather than the swapping from one particular mode to another.

For precision measurement in an interferometer setup, HeNe laser tubes are often used, which are frequency stabilized to increase the coherence length. Typically, this frequency stabilization is accomplished by wrapping a heater around the tube to control the resonator length, as thermal fluctuations within the tube can cause variations in the distance between mirrors. For this purpose, short tubes are used (in the <2mW range), which have only two perpendicularly polarized longitudinal modes. A common approach to get the heater’s control signal is to separate the two modes by a polarizing beam splitter and steer them toward two separate detectors. Control electronics drive the heater so that the signal difference between the two detectors is kept at zero.

In some cases, the two modes instantaneously switch their polarization state. This polarization switching leads to a loss of locking at the control electronics, and in turn, a loss of frequency stabilization. Tubes in which this phenomenon occurs are useless for interferometer applications. Given that the root cause of this polarization switching is not fully understood, LASOS tests every HeNe tube they produce to select those free from this undesired phenomenon. These HeNe tubes, free from polarization switching, are offered in a line of ‘Special Selected Models.’ Within this line are other selection criteria options, including whether or not the tube has ‘Side Lines,’ ‘Two Longitudinal Modes,’ ‘Magnetic Field Stability,’ and ‘Split Frequencies,’ the descriptions of which are a bit outside the scope of this article.

The HeNe lasers from LASOS boast an excellent TEM00 beam, robust mechanical design, a long service life of up to 30,000 hours, and are available in 543nm, 594nm, and 632.8nm wavelengths, with output powers from 0.5mW to 20mW. Choose between standard and customized models, with available options such as single-mode or multimode, random or linear polarization, Brewster window tubes, and fiber coupling. All models can be provided with either a laboratory power supply, or one of three OEM power supply versions. Designed for long life, low noise, and high-stability, with many customization options, these HeNe lasers are perfect for applications including spectroscopy, digital imaging, metrology, industrial measurement, medical, and more!