We recently updated a blog post titled “What are the Critical Laser Source Requirements for Laser Designation,” in which we took a deep dive into the fundamentals of laser designation as well as the military’s requirements for such a laser.  In that blog post we cited NATO standard STANAG 3733, which required that the laser beam have a divergence small enough so that 90% of its energy is on target 95% of the time assuming a 2.3 x 2.3 m target.  We went on to explain that most laser designators are designed to be used at distances up to 5 km.  Therefore, one of the most critical factors when choosing a laser source is the beam divergence.

In laser designation, you can take advantage of this fact, to ensure a smaller spot size on the target by starting out with a larger beam exiting the designator.   Two primary beam expander designs are used today, Keplerian and Galilean.  From the image below you can see that the fundamental difference between these two designs is the existence of an intermediate focus.  While the Keplerian design can be beneficial for lower power applications such as microscopy, for most high power and field-deployable applications the Galilean design is far superior.  The Galilean is preferred in applications such as laser designation not only because it is more compact, but also because it doesn’t run the risk of thermal instabilities due to heating from the intermediate focus. 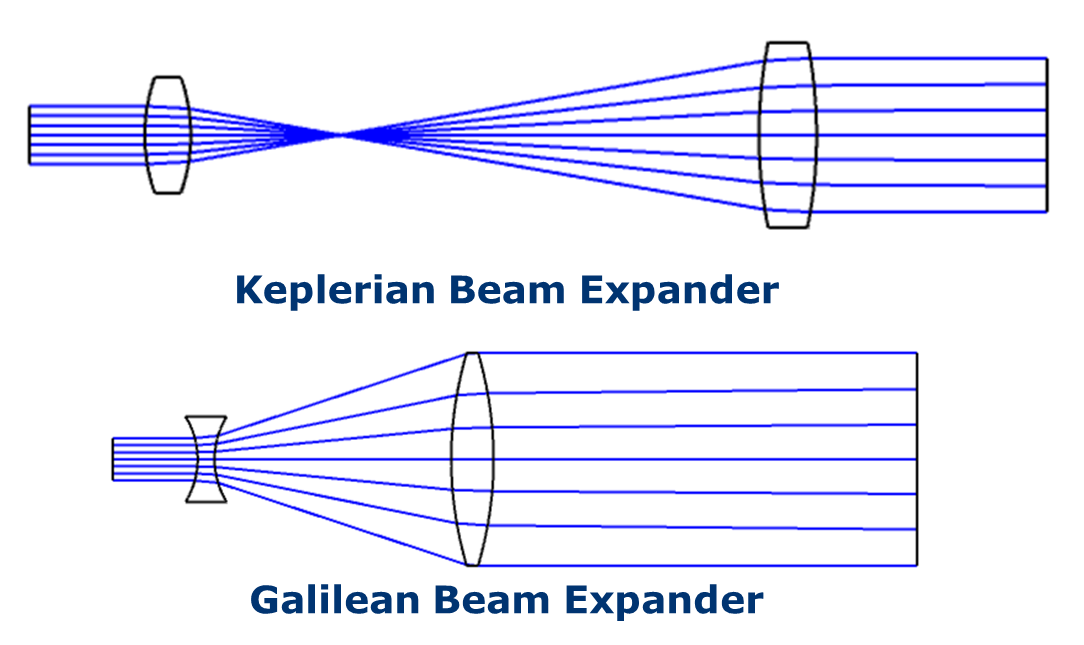 While using a beam expander is an excellent way to decrease the beam divergence and ensure a longer range (smaller spot at a distance) for laser designation it is still imperative that you start out with as low a beam divergence laser as possible.  For example, the Airtrac from Arete Associates has a beam parameter produced (BPP), of approximately 6 mm-mrad.  This means that at a beam diameter of 6mm the laser will have a beam divergence of 1 mrad.  Therefore, if this laser beam was expanded to a collimated diameter of 24 mm it would have a beam divergence of 0.25 mrad.  By definition a mrad means that after 1 m the radius of the beam will increase by 1 mm, so this means that at a distance of 5 km our beam (with a 0.25 mrad divergence) will be approximately 2.5 m in diameter.  Which is more than acceptable for the NATO guidelines.

If you would like to get a more detailed understanding of the Airtrac from Arete Associates, click here to visit the product page for more detailed technical specifications.   As always, you can also talk to one of our laser experts today by calling 1-636-272-7227.