Solid State Lasers and Laser Diodes from RPMC Lasers Inc»RPMC Lasers Blog»Industry News Blog Posts»First Ever Image of a Black Hole in the Center of the M87 Galaxy.

On April 10th, the scientific community was elated at the release of the first-ever image of a black hole in the center of the M87 galaxy in the Virgo Cluster.  By Imaging the photon ring around the black hole shadow and utilizing the Schwarzschild Radius, scientists were able to not only validate the existence of black holes which were predicted by Einstein’s General Theory of Relativity they were also able to accurately measure the mass of the black hole at 6.5 billion times that of our sun.  To commemorate this truly massive discovery, in this blog post we are going to diverge from our standard discussions on laser-based techniques and examine how the team at the Event Horizon Telescope utilized very-long-baseline interferometry (VLBI), which is an optical analog of sparse aperture imaging, to facilitated this breakthrough discovery. 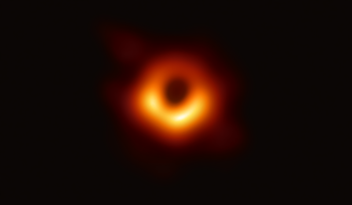 Even though the black hole shadow is more extensive than our entire solar system, the fact that M87 is 55 million light years from the earth makes it extremely difficult to resolve. The team at the Event Horizon Telescope has compared the resolution requirements of the image to taking a picture of an orange on the surface of the moon.  This example arrives from the fact that when you factor in the 0.011 light year diameter of the M87 black hole, and it’s 55 million light year distance you can calculate that the photon ring around the event horizon spans approximately 40 micro arcseconds or 11.2 x 10-9 degrees of the night sky.  Since all imaging systems need to have a resolution of at least double feature size, this means that at the 1.3mm wavelength utilized by the radio telescopes you would need a diameter of ~ 13,000 km which is roughly the size of the earth.    While it is impossible to produce a single telescope anywhere near this size, using a technique known as a “phased array” (or VLBI in radio astronomy), where multiple telescopes can be combined to produce images with a resolution equivalent to the spacing between them.  Therefore the Event Horizon Telescope team utilized eight different radio telescopes in 6 locations on earth including Greenland and Antarctica, to create a telescope with an effective diameter equal to that of the entire planet.

Unlike in optical telescopes though, radio telescopes directly measure spatial frequency content, which then must be Fourier transformed to produce the image.  This results in the limitation where each separation between the two observation points can only measure one spatial frequency, therefore producing only six spatial frequencies at a time which is far less than would be required to create an image.  Where the true genius of their accomplishment came in was in realizing that as the earth rotated each set of radio telescopes would be looking at a slightly different location and therefore over the course of a night would fill in many of the spatial frequency gaps.  By precisely measuring the time of each measurement with atomic clocks the team was able to increase the spatial frequency coverage significantly, to the point where Dr. Katie Bouman and her team had enough data to develop the image processing algorithm used to produce the image. 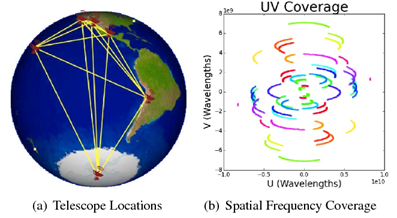 The team collected data on four different nights in April of 2017 at each location simultaneously, all of which produced the same image proving that the algorithm worked repeatably.   In the pictures below you can see the swirling disk around the event horizon which is consistently brighter on one end, due to the red shift in the light as it moves away from us. 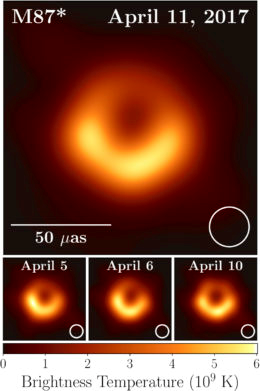 For a far more detailed explanation of the methodology used to produce this ground breaking image we highly recommend you click on the link below to view a recent lecture given by Dr. Bouman at Caltech.

Here at RPMC, we are excited to not only provide you with the most up to date information about laser technology and applications, but we also strive to continue to support the scientific community as a whole. As a result, we are continually updating our Knowledge Center with an ever-growing collection of blog posts, application notes, and white papers.  Additionally, in their laser applications guide on the website RPMC has compiled a detailed list of common solid-state laser applications and organized them in an easy to search format, providing a brief description as well as a list of commonly used lasers.

To get alert of all of our new blog posts, follow us on Facebook, LinkedIn, or Twitter. For detailed technical specifications and applications support on any of the lasers we offer at RPMC, feel free to call our laser experts anytime at 1-636-272-7227 or contact us Here.