Interferometry is one of the most widely used precision measurement techniques known to humankind. The precision provided by interferometers has enabled countless scientific discoveries and breakthroughs. These discoveries range from the Michelson and Morley Experiment in 1887, which led to the discovery that electromagnetic waves could propagate through the vacuum of space without needing an “aether” to detecting gravitational waves in 2015 by the Laser Interferometer Gravitational-Wave Observatory (LIGO). In addition to these groundbreaking discoveries, interferometry is also used daily for applications including infrared spectroscopy, telecommunications, and metrology. It would be impossible to review all aspects of interferometry, so we will instead focus on an application of importance to laser engineers: the testing of surface flatness of optical elements with a technique called Fizeau Interferometry. This blog will briefly introduce the fundamental physical principles of interference. Then we will get into the specifics of the Fizeau Interferometer, explaining why this interferometer is uniquely suited for measuring the surface flatness of optical elements, and how high-quality DPSS lasers greatly benefit this application.

One of the unique physical properties of waves is their ability to be superimposed on top of each other. This property arises because, unlike solid matter, two or more waves can exist in the same physical space, at which point their amplitudes add together. As can be seen from the simulation below, when the two waves are precisely in phase with each other, this superposition produces a resultant wave with twice the intensity of the original. On the other hand, when the two waves are perfectly out of phase, they cancel out. These two processes are known as constructive and destructive interference, respectively. 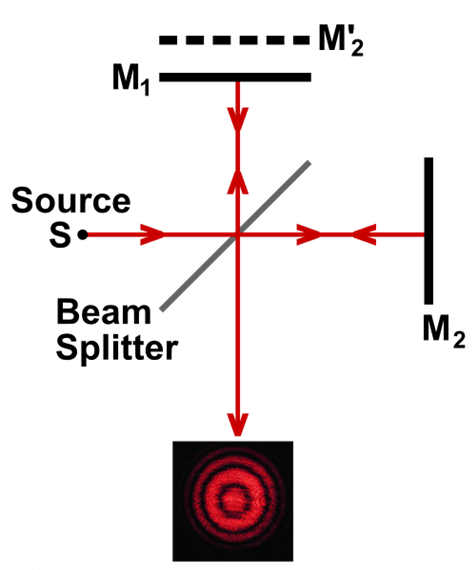 In an interferometer, two identical beams of light, typically but not always from a laser source, are split into two different legs and then recombined. If there is any difference in the optical path length between each of the legs of the interferometer, it will cause a pattern of constructive and destructive interference. This interference pattern directly correlates to the difference in path length, and as the optical path length varies by half of a wavelength of light, the pattern of bright and dark spots will invert. Counting the variation in the fringes allows for sub-wavelength displacement measurement. 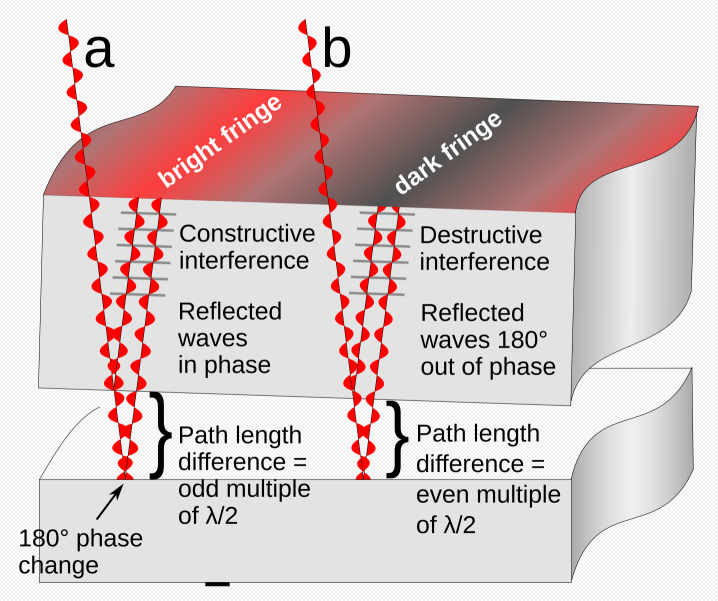 How interference works: The distance between the bright fringe (a) and

wavelength, so a change of the width of the gap of 1/4 wavelength. So

gap of 1/2 wavelength. The gap between the surfaces and the wavelength

of the light waves are greatly exaggerated. Courtesy of Wikipedia.

While optical testing utilizes many different interferometer types, the Fizeau interferometer has become the standard for evaluating optical quality. In the Fizeau interferometer, the laser source is first spatially filtered to ensure that the beam quality is as close to perfect as possible. Then the beam of light is recollimated using a collimating lens. Finally, the beam is directed to the reference surface, which is precisely placed on top of the flat being tested, separated by narrow spacers. This reference surface must be made to exceptional optical quality, typically with a roughness value less than a twentieth of a wavelength. The first surface of the reference flat is slightly angled to ensure that any light reflected doesn’t contribute to the resultant interference fringes. However, the second surface is straight so that the reflected light travels back along the same path as the incident light. When the laser light transmitted through the reference surface is incident on the test flat, the reflected light from the flat will also propagate back along the same path as the reference surface. Therefore, any surface defects will result in a difference in optical phase between the two wave fronts and result in interference fringes. In the two images below, you can see a simplified example of a schematic diagram of a Fizeau interferometer and an interferogram captured by Wanqing Xie, Et al. at the Harbin Institute of Technology in China using an interferometer from the Zygo Corporation. In the interferogram, you can see surface deformation ranging from roughly +/- half a wavelength. 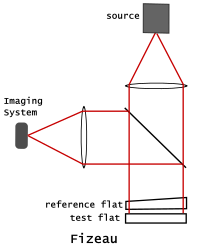 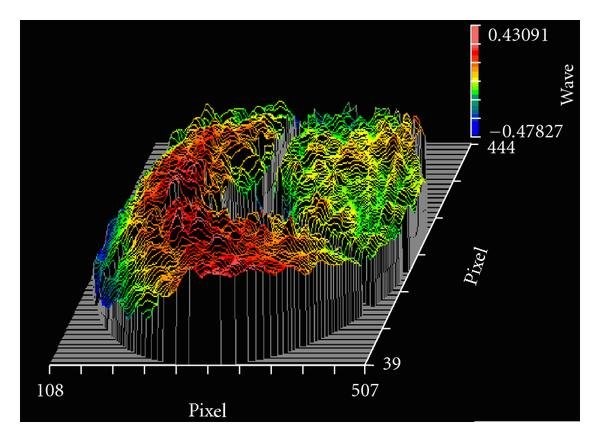 This interferometer can also test curved optics such as lenses and curved mirrors. For this measurement though, they require the addition of a transmission sphere. This addition is a set of lenses whose power is specially designed to match the angle of the test surface’s reflected rays to re-collimate the light back into the interferometer. In the figure below, you can see an example of a Fizeau interferometer from Zygo Corporation showing the use of a transmission sphere (TS) to test a curved optic. It is important to note that these transmission spheres must be designed to be diffraction limited to avoid adding any additional aberration to the wavefront. Otherwise, they will not produce an accurate interferogram.

Just as the reference surface and the transmission sphere must be designed to avoid adding any additional aberration into the system, so must the laser beam itself. It is essential that the laser exhibit a high level of spectral stability, ensuring that any changes in the interference pattern are caused by features in the sample and not originating from the laser beam. In addition to spectral stability, high beam pointing stability ensures consistent measurements by mitigating any beam position drift concerning the position of the sample. Lasers with longer coherence lengths, and subsequently narrower linewidths, play an important role in determining the resolution of the measurement, as well as consideration of the wavelength used. Exhibiting both single longitudinal mode and single spatial mode has excellent benefits. Having a single longitudinal mode laser ensures that the coherence length is long enough to have no phase discontinuities over the measurement length. This benefit is significant for optical surface measurement since many industrial Fizeau interferometers can be several meters long. As for the spatial mode profile, having a high beam quality with a single TEM00 mode provides the same assurance over the entire optic. Also, it reduces complexities when analyzing the measurement results. While all interferometers require single longitudinal mode, the fact that Fizeau interferometers expand the beam across the whole optic means they rely more on the laser’s high-quality spatial mode profile. Additionally, since the laser beam is spread so widely and, in many cases, only a small fraction of the laser light is reflected into the interferometer (for example when testing lenses and windows), these interferometers typically require higher laser powers as well.

Traditionally this has been achieved using stabilized HeNe lasers. Today, solid-state options are not only readily available, but their performance is starting to outmatch those of even the highest-end stabilized HeNe sources. For example, the Solo – 640/1000 single frequency diode-pumped solid-state (DPSS) laser from UnikLasersproduces output powers of up to 1 watt with perfect TEM00 spatial mode profile at 640nm. These lasers offer exceptional power stability of ≤ 2% over 8 hours with RMS noise less than 0.1% (10 Hz – 10 MHz). Additionally, the Solo – 640/1000 offers actual single frequency performance with a laser linewidth less than 500 kHz (≤ 0.1 nm) and a coherence length greater than 100m, all within a compact footprint laser head of only 80 mm x 95 mm x 240 mm with attached heatsink.

Here at RPMC Lasers, we are proud to be the exclusive North American distributor for all UnikLasers CW DPSS products which range from 349 nm to 1064 nm. The Unik series of CW single-frequency lasers, featuring the Solo and Duetto configurations, are available at a variety of wavelengths with high average powers, making them well suited for a variety of highly specialized scientific and industrial applications. The Solo and Duetto enable superior performance, high output powers, spectral stabilization, and outstanding beam properties in an overall compact footprint. These high-quality, high-performance, single-frequency, CW DPSS lasers are perfect for a wide range of applications, including Interferometry, Raman Spectroscopy, Brillouin Scattering, Flow Cytometry, Optical Manipulation, Optical Grating Mastery, and many more, depending on the configuration specifications.

For some further reading about the benefits of these single-frequency, CW DPSS Lasers for interferometry and other applications, check out this blog: