Solid State Lasers and Laser Diodes from RPMC Lasers Inc»RPMC Lasers Blog»Pulsed Lasers Blog Posts»What is a Thin Disk Laser, and What Advantages Do They Offer? 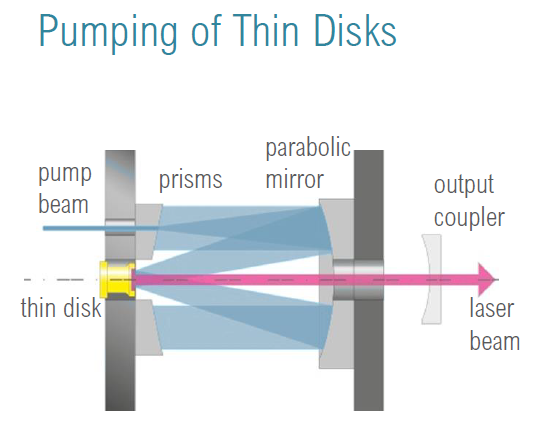 A thin disk laser is a type of diode-pumped solid-state (DPSS) laser technology in which the gain medium is comprised of a thin disk of typically Yb:YAG crystal. The thickness of one of these disks (typically 150µm to 200µm thick) is substantially smaller than the beam diameter. This feature allows not only the ability to easily scale up power via pump beam diameter, but also provides a large surface area for heat dissipation. One entire surface of the thin disk is mounted to an actively-cooled heatsink, which efficiently draws heat out axially or longitudinally, rather than transversely. The back surface, mounted to the heatsink, is coated to reflect both the pump and laser radiation. The beam from the pump laser is collimated, directed toward a parabolic mirror, and then reflected back toward and through the thin disk. The pump beam is then reflected off the back, coated surface of the disk, back to the parabolic mirror. This process repeats, allowing the beam to pass through many times until lasing occurs.

The invention of the thin disk laser came in 1991 through collaboration between the German Aerospace Center and a group at the University of Stuttgart. The team at Stuttgart was led by Dr. Adolf Giesen and included his colleagues: Klaus Wittig, Uwe Brauch and Andreas Voß. A few years earlier, Dr. Friedrich Dausinger had proposed an idea for the ideal welding laser: power, efficiency and focusability of a CO2 laser, with the wavelength like that of an Nd:YAG laser. On a flight home after attending a lecture by MIT scientist T.Y. Fan, Giesen had his eureka moment, realizing how this laser could be designed. The strategy was simple: increase the surface area of the active laser medium. One already realized method would be to maximize length by minimizing diameter (fiber lasers). The other method would be to maximize diameter by minimizing length (thin disk lasers).

Traditional rod type crystal laser designs are limited in average power by the thermal lensing effect. Thermal lensing can cause multiple issues, including a change in the effective focal length, introduction of optical aberrations, thus reducing beam quality, and even degradation of power conversion efficiency. As mentioned above, the design of the thin disk laser allows for much more efficient thermal management than typical rod geometries. This front-face pumping technique, with one full surface of the extremely thin disk mounted to an actively-cooled heatsink provides a large surface area to volume ratio. In addition, due to the thin nature of the disk, the distance from the pump beam spot to the cooled surface is miniscule. Because of these design features, virtually no thermal lensing occurs, and a high-quality beam is easily obtainable at high power levels, with higher levels of power conversion efficiency. 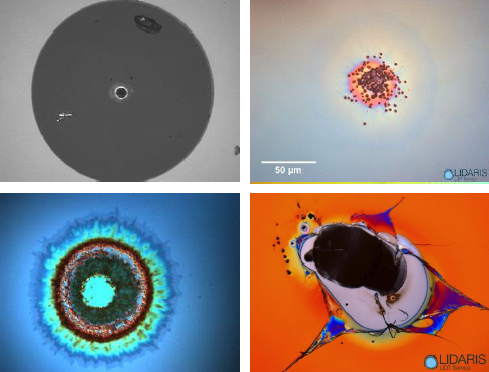 Furthermore, Yb:YAG crystal has a fundamental wavelength of 1030nm and displays ideal properties for the generation of high-power and high-quality beams. A wide absorption peak around 940 nm allows for efficient pumping. With 940nm diode pump modules having typical lifetimes in the 10s of thousands of hours, disk lasers allow for some peace of mind with low overall cost of ownership and high reliability over time. Another benefit provided by thin disk laser technology is the reduction of optical damage. High power densities and high peak power densities are the main reason for various optical damage in other laser types, including fiber lasers. Therefore, risk of damage is greatly reduced due to the large beam diameters inherent to thin disk lasers.

For example, the VaryDisk Series platform is a high energy, multi-milli-Joule laser system for laboratory investigations or industrial use. This is a thin disk regenerative amplifier for amplification of femtosecond, picosecond or nanosecond pulses with amplification factors in the order of 10⁶. The output specifications can be chosen according to our customers needs, mainly by choice of the seed laser (multiple seed lasers are possible) and various options available. The base configuration typically provides up to 150 W average power @ 1030 nm, 15 – 150 mJ pulse energy with 1 ns pulse width (compressible to < 2 ps), and a repetition rate range from 1 kHz to 10 kHz. Typically, the VaryDisk E150 has industrial uses for surface structural/chemical modification of electronic or mechanical materials, as well as scientific and research applications in material processing labs, attosecond science, and strong field physics. Applications that utilize high energy pulse output benefit from the advantages of thin disk lasers, compared with their fiber laser counterparts. 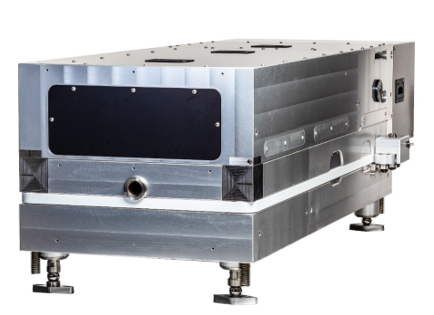 The TDM 1.1 & 3.0 Thin Disk Pump Modules contain optics for guiding up to 1 or 3 kW (respectively) of pump power multiple times over a laser active thin disk medium (Yb:YAG), such as provided by our TD-XX-7X Thin Disk Gain Media. The module is designed to allow for 48 passes of pump light over the disk​. Due to its easy integration in a laboratory style laser setup and due to its many degrees of freedom for adjustment, these pump modules are recommended for a laboratory environments, especially for R&D projects. 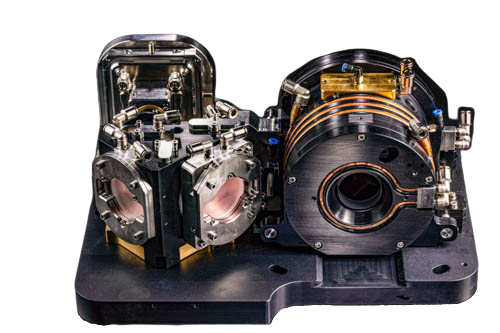 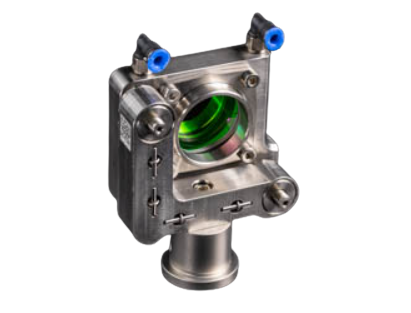 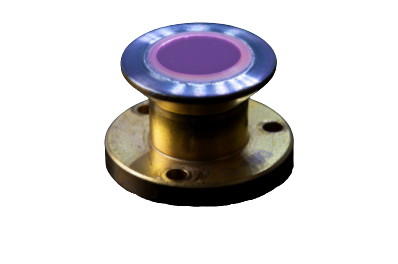 The TD-XX-7X is a line of thin disk laser crystals mounted on heatsinks. Mounting thin disk laser crystals to a proper heatsink ensures effective, homogenous, axial heat removal over a large surface area, the key technology for disk lasers. These OEM components are intended for various laboratory applications and for OEM production and are tested at typical operation conditions. We also provide the SH-XY-X, a line of 1″ and 2″ water cooled Mirror Mounts, the ultimate solution for high power applications requiring stringent long-term alignment stability.