Q-switching is the most effective method for producing high energy pulsed lasers.  While there are many different varieties of a q-switch, they all follow the same basic operating principle.  Q-switches temporarily increase the cavity losses so that the gain threshold is artificially high preventing the laser from emitting light.  This process allows the population inversion inside of the gain medium to grow until it becomes fully saturated.  At this point, the q-switch is “opened” causing the cavity losses to plummet, dropping the gain threshold, and allowing all of the stored energy in the gain medium to be emitted in one rapid pulse.  This process, which is illustrated in the figure below causes the emission of extremely short pulses of light with extremely high peak powers. 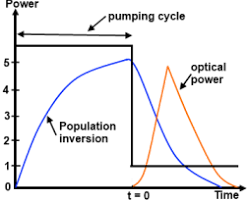 While there are a wide variety of q-switch technologies, notably including acousto-optic and electro-optic modulators, the technique as a whole can be broken down into two primary categories of q-switches,  passive and active.  Active q-switches rely on the ability of “flip a switch” and rapidly adjust the lasers cavity lose.  A perfect example of this is an acousto-optic modulator, which, when activated creates a grating which deflects many spontaneously emitted photons out of the laser cavity, but once the modulator is turned off it allows the spontaneous photons to pass through and initiate stimulated emission.  Passive q-switches, on the other hand, take advantage of a process known as saturable absorption.  Saturable absorption derives from the fact that there is a limit to the amount of light that a material can physically absorb at a given wavelength before the energy level become saturated and the material becomes temporarily transparent.  As a result, if a saturable absorbing material is placed inside of the laser cavity, it will absorb all of the spontaneously emitted photons until it reaches saturation where it will then allow the photons to pass through and initiate stimulated emission.

Both of these q-switching techniques produce short pulses and high peak powers, but they each have their pros and cons.  For example, active q-switching allows the user far more control over when the pulse will be emitted and therefore how long population inversion will be allowed to build up.  But, on the other hand many common active q-switches such as Pockels cells (which utilize the electro-optic effect) often require the driver to swing several kilovolts each time the switch is triggered.  By contrast saturable absorbers require no drivers at all, meaning that not only are they compact, but they are also far less expensive.   As a result, when you are deciding between an active versus passive q-switched laser there are four key things that you must keep in mind.

In summary, when choosing between actively q-switched and passively q-switched lasers, the key is to understand the tradeoffs between cost/size and triggering/energy and decide which is best for your particular application.   If you would like information on any of the wide variety of q-switched lasers we offer here at RPMC, click here, or talk to one of our laser experts today by calling 1-636-272-7227.