Last summer we released a white paper titled “How Mode-Locked Lasers Affect the Past, Present, and Future of Two-Photon Microscopy” which reviewed in detail the evolution of two-photon microscopy, with a particular focus on its usefulness in producing high-resolution images of living cells.  Since the release of that paper, we have been pleased to see a significant uptick in interest from our customers in using the technique for a wide range of applications in biophotonics research.  In this particular blog post, we are going to take a look at research conducted by our customer, Dr. Christopher Harvey, at Harvard Medical School who has been using the DIADEM-IR-30 mode-locked laser from Spark Lasers to facilitate his cutting edge optogenetics research.   In Dr. Harvey’s study, the particular sample under investigation is mouse parietal cortex, where the neurons have genetically modified calcium indicator GCaMP6s and the optogenetic actuator ChrimsonR.

Optogenetics is a biological technique that uses light to control cells in living tissue, typically neurons, which are modified to exhibit various photosensitive behavior.  While this blog post is intended to provide an overview of the work done by Dr. Harvey, not to serve as a detailed explanation of optogenetics, to understand what is going on in this experiment, it is prudent for us to make a minor detour and first explain what an optogenetic actuator is.   The simplest way of describing an optogenetic actuator is that they are proteins which cells are genetically engineered to express when exposed to light.  Once expressed these proteins can induce a wide range of actions including but not limited to modifying or suppressing neural activity, therefore allowing scientist to alter neural functionality in real-time by exposing the tissue to particular wavelengths of light.

In Dr. Harvey’s particular case the presence of the ChrimsonR actuator was verified using two-photon fluorescence microscopy with an excitation wavelength of 1060nm.  The figures below show the in vivo, two-photon calcium imaging performed with the DIADEM-IR-30.  Figure (a) shows an example of a two-photon field of view in mouse parietal cortex where the individual neurons were sequentially stimulated with 3 x 30 ms spiral scans where the red asterisks indicate stimulation sites.  Figure (b) shows the normalized ΔF/F responses of target neurons, which represents the normalized change in fluorescence intensity over time showing the rate of excretion on the ChrimsonR optogenetic actuator over time.  The data from these two figures show how Dr. Harvey was able to use two-photon microscopy to verify the success of genetic modifications. 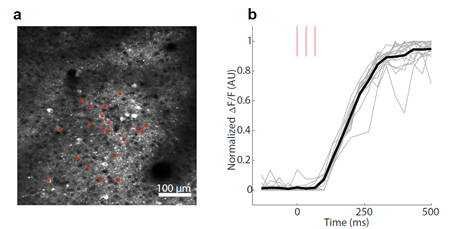 Additionally, his group also provided us with the video below showing the release of the ChrimsonR actuator in real time.  To produce this video, he used a spatial light modulator to generate beamlets targeted to each neuron indicated by a red arrow, then simultaneously activated them using 10mW of average power per cell.  As the stimulation laser activates the cells, their fluorescence increases as a result of calcium entering the cell and binding the calcium indicator.   As in the previous example, the stimulation was done using the DIADEM -IR-30 mode-locked laser from Spark Lasers, which was customized to lase at 1060nm.

In our previous white paper on this subject we focused on the Alcor laser series, but as this data shows, Spark Lasers offers a wide variety of mode-locked ultra-fast laser systems which can be used in biophotonics applications.   The DIADEM-IR-30 series of compact femtosecond lasers provides users with a compact, high energy ultrafast laser for advanced applications requiring short, femtosecond, laser pulse widths.   This laser series offers over 40µJ at 30W and up to 1MHz (standard), with pulses below <400 fs from single shot to 1 MHz and a remarkable beam quality with M² < 1.2. The DIADEM laser series combines the most advanced electronics for on-the-fly pulse control with a compact design and less than 5 minutes of set-up time.  For these reasons and more, RPMC Lasers is proud to be the exclusive North American distributor for Spark Lasers.

While this is only one example of the wide variety of applications for two-photon microscopy in life sciences, it does an excellent job of showing the capabilities of the technique and its importance of mode-locked lasers in modern biophotonics.   It must be noted that while this data was collected at Harvard Medical School, this blog post in no way is meant to imply any endorsement from Harvard University.  This blog post is intended merely to inform our readers about the novel research being conducted in Dr. Harvey’s research group utilizing the DIADEM-IR-30 mode-locked fiber laser from Spark Lasers.

For detailed technical specifications on a wide range of mode-locked fiber lasers offered by Spark Lasers click here or talk to one of our laser experts today by calling 1-636-272-7227.