Methane (CH4) is the principal component in natural gas making up about 97% of its concentration, with the remainder consisting of small amounts of more complex hydrocarbons like ethane (C2H6), propane (C3H8), butane (C4H10), and pentane (C5H12).  Being produced in nature through the anaerobic decomposition of organic matter trapped beneath the sedimentary layers of the earth, it is found abundantly near other fossil fuels such as in coal mines.  Even though it is the simplest of all the hydrocarbons, methane gas is used widely in industrial applications such as power generation, transportation, and industrial chemical manufacturing, in addition to its more commonly known use as a consumer fuel source.

Methane is not only highly flammable, but the fact that it is lighter than air, displacing oxygen in a confined space, means it poses the simultaneous risk of explosion and asphyxiation.  It is also a significant greenhouse gas, even though it doesn’t linger in the atmosphere as long as carbon dioxide, methane is far more effective at absorbing heat meaning its greenhouse effects while shorter–lived can be far more devastating.  For all of these reasons, it is easy to see why methane detection in both the open atmosphere and confined spaces is critical.  Detection methods have come a long way from the days of the “canary in the coal mine,” where a canary bird was taken down into the mineshaft so that if there were a spike in the amount of methane in the atmosphere, the canary would pass out first alerting the workers to evacuate.  These days there is a wide range of measurement methodologies used for methane detection, but in this application note, we will focus primarily on a technique known as tunable diode laser absorption spectroscopy (TDLAS).

All gasses have a unique absorption spectrum in the infrared range, due to the allowed vibration and rotation modes which arise from its molecular bond structure.  The various absorption bands which make up this spectrum can vary in both the magnitude of the absorption efficiency and shape allowing them to serve as a molecular fingerprint, to differentiate different gases in a mixture.    In TDLAS a laser diode is rapidly tuned over a single rotational-vibrational line in the infrared absorption spectrum of the molecule of interest, to map the intensity and shape of the cross–section.  While the most robust absorption cross–section for methane is at 3.39 microns, this wavelength is problematic because of the limited availability of efficient laser sources and detectors; luckily methane also has an absorption band at 1.65 microns.  The 1.65-micron band has a much smaller cross–section, but it has been shown to be effective at detecting methane at concentrations where the risk of asphyxiation or explosion becomes dangerous. 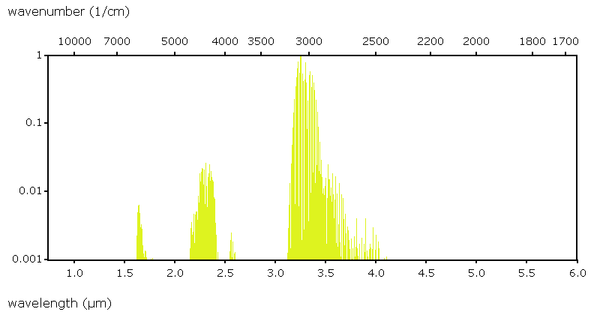 In TDLAS the total strength of this absorption band is measured by scanning a single frequency laser source across the spectral band to measure its entire line-shape function.  This is necessary because to determine the concentration of methane the simplistic view of absorption as monochromatic where all of the molecules in a volume of a gas have an identical vibrational frequency isn’t sufficient.  In reality, there is a degree of variability which arises from a wide variety of uncertainness, resulting in the transition cross section taking on a Lorentzian line-shape where the absorption cross section peaks at the center wavelength and decays rapidly to either side.    Only when the full cross–section (shape and magnitude) is measured can the molecular density be calculated using the following equation,

In this equation I(ν) represents the measured intensity as a function of frequency, I(νo) is the intensity of at the center frequency, S is the cross section strength for methane, and L is the interaction length.  This result not only gives you the exact molecular concentration but it simultaneously reduces the laser noise through the ratioing process.

As discussed earlier there are several advantages to working at the 1.65-micron absorption band for methane detection, predominantly the viability of commercial off the shelf laser diodes and photodiodes at that wavelength.  High–speed InGaAs photodiodes and digitizers are used commonly in telecom and defense application.  While they exist, single frequency tunable diode lasers at 1.65 microns, on the other hand, are less common.  In TDLAS these lasers are scanning around the center frequency in a controlled manner allowing for the intensity function I(ν) to be precisely measured.   During this process, it is critical for the laser diode to maintain a mode-hop free scanning range devoid of any hysteresis. 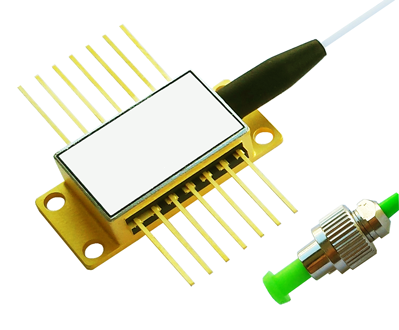 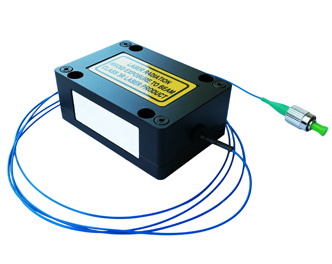 In DM laser diodes single frequency operation is achieved by introducing index perturbations etched into a few specific locations along the waveguide.  This manipulates the Fabry-Pérot cavity loss, resulting in the enhancement of one longitudinal mode and the suppression of all others.   As can be seen in the figure below, this results in a single-mode output spectrum with >40dB side-mode suppression ratio (SMSR).   To ensure similar performance from a DFB laser with a stable single frequency operation and yield requires asymmetric, or low reflectivity coated laser facets, which can induce either modal instability or linewidth broadening. 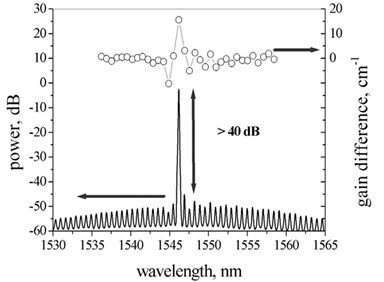 Over the years methane gas detection has come a long way since the canary in the coal mine.     Methane can lead to explosions in coal shafts, fires in landfill sites, and sewer pipes; in kitchens, natural gas is used for cooking and as discussed earlier it is used in a wide range of industrial applications.  Today methane detectors are fast, accurate and compact due in no small part to the use of TDLAS at 1.65 microns.  These laser-based detectors are ideally suited for deployment in both industrial, commercial and residential facilities to help prevent the threat to human health and dangerous explosions. These methods are extensively used in industries by, estimating leaks in pipelines, coal mines, etc.

At RPMC Lasers we are currently offering these lasers in a wide variety of packages including a 14-pin butterfly with integrated TEC and optical isolator, a 14-pin butterfly with lens-ended butt-coupled fiber, or a free space package with TEC. They are also available as an OEM module incorporating a built-in driver and TEC controller.

For additional for detailed technical specifications on our DM single-frequency lasers for gas, sensing click here or talk to one of our laser experts today by calling 1-636-272-7227 or by contacting us Here.