Laser-induced breakdown spectroscopy (LIBS) is one of the most popular laser based atomic spectroscopy techniques on the market today.  Nowadays, LIBS is rapidly becoming an indispensable tool for elemental analysis and is generally viewed as a complementary technique to other elemental methods such as mass spectrometry.  LIBS has been deployed in a wide range of industrial and scientific applications including on the surface of Mars, where over 200,000 LIBS spectra have been collected aboard of the Mars Science Laboratory Rover Curiosity.  In addition to the extreme environments of the Martian surface, LIBS has also been used in similarly challenging environments here on earth such as industrial mining and scrapyard metal sorting.  Therefore, it is critical that LIBS lasers are not only capable of meeting the pulse energy requirements of the application but are also designed for use in these harsh environments.   In this blog post, we briefly review the basic of LIBS and then discuss how Er:Glass lasers are uniquely suited for LIBS applications in harsh environments.

As we previously discussed in our applications note on Biomedical Applications of LIBS, this is a process where a focused laser vaporizes a microscopic portion of the sample causing a momentary plasma to be formed.   As a result, all of the ionized elements in the plasma plume emit light corresponding to their unique atomic energy levels.  By collecting the light emitted from the induced plasma plume and directing into a spectrometer, the measured lines can then be correlated with the presence and concentrations of the samples elemental structure.  While the physical process is quite different, it is often helpful to think of LIBS, as an optical analog to mass spectrometry.

To properly ionize the sample, the laser source used must have a sufficiently large energy density to ablate the sample in as short a time possible.   As a result, these lasers must be able to produce output powers in the millijoule range with pulse durations in the nanosecond to the picosecond range.  This way when they are focused down to a small spot, this allows the laser to ablate the sample quickly, and trigger the spectrometer to immediately start the acquisition process to collect the atomic emissions from the short-lived plasma plume.  Therefore, most lasers used in LIBS applications are q-switched diode pumped solid state (DPSS) lasers.

At RPMC Lasers we offer a wide variety of q-switched DPSS lasers that meet the optical requirements of LIBS. In particular, the Er:Glass DPPS lasers from Optitask are ideally suited for integration into industrial equipment particularly those used in harsh environments. The unique features of these laser stem from their mono-block cavity design which includes the laser rod, q-switch and mirrors all in one, similar to a microscope laser cavity but capable of much larger pulse energy.  For example, the OT-29 from Optitask produces 1.2 mJ of pulse energy in an extremely compact housing measuring in at 46 mm x 30.5 mm x 17.4 mm, while still meeting all MilSpec MIL-STD810C requirements for vibration, transportation shock, and ballistic shock.  This laser can also be operated over a vast temperature range from -40 oC to +75 oC and is guaranteed to last for at least 1 million pulses. 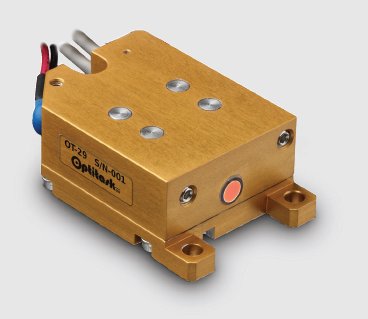 We offer a wide range of lasers from Optitask depending on the needs of your LIBS application.  These lasers are available with both diode and flashlamp pumped excitation depending on your pulse energy requirements and are also available with both active and passive q-switching.    This allows you to choose pulse energies between 1mJ and 10mJ, pulse widths from 9ns to 40ns, and pulse repetition rates from 1Hz to 30Hz.   All of the Er:Glass lasers offered by Optitask are air-cooled, with conductively cooling requirements as low as 0.8 W for the 1mJ systems and 35W for the 10mJ systems.  An additional feature that makes these lasers ideal for LIBS application is the built-in photodiode for which can be used as the trigger signal for the spectrometer to begin the spectral acquisition. This combination of optical performance and environmental stability genuinely make the Optitask lasers the perfect choice for harsh environment field deployable LIBS applications such as mining and scraping.