To briefly review the previous post, we established that the interplay between the gain threshold, gain bandwidth, and longitudinal mode spacing is what ultimately determines whether or not a diode operates as a single- or multi-mode device.  We further went on to explain that for only one longitudinal mode to exist the gain threshold needs to be significantly high and the gain bandwidth substantially narrow to allow for only one mode to lase at a time.  What we did not explain in that post is that the diodes gain curve is dependent on both the junction temperature and drive current.  While a detailed analysis of why the current and temperature affects the gain curve is beyond the scope of this post, the diagram below does an excellent job of illustrating the basic principles.  This figure shows that as the current in increases or decreases the height of the gain curve will increase or decreases and that as the temperature increases or decreases the curve with red shift or blue shift. 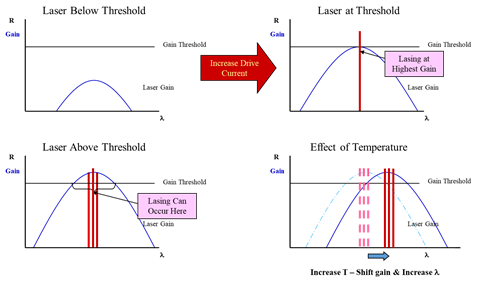 With this knowledge, it should now be evident that for a standard free running laser diode, the only way that single longitudinal mode operation can be achieved is by precisely controlling both the drive current and temperature.  While this is possible, it is not only technically challenging to make, but it is also reasonably impractical because it limits the functionality of the diode.  For example, it limits the environmental conditions for laser operation and prevents the user from adjusting the output power of the laser diode.   Luckily there are a wide variety of techniques which have been developed for selectively modifying the gain threshold by either increasing or decreasing the cavity loss at specific wavelengths.   As a result, as the current and temperature of the diode are varied and single mode operation is always maintained.

It would take far too long to dive into the physics behind each of the methods used so in this blog post we are going to simply list some of the standard techniques and provide a brief overview.

Here at RPMC Lasers, we have over 20 years of experience with diode lasers and are readily available to assist you in not only deciding which of our standard off the self-laser diodes are ideal for your application, but we are also able to offer countless custom laser diode packaging configurations with a wide range of integrated optics include all of the designs discussed above.  For more information about our wide variety of laser diodes, you can click here, and for more information about laser diode fundamentals be sure to visit our Lasers 101 page.