As most people already understand, a laser diodes performance is highly dependent on its operating temperature, which is why most mid- to high-end laser packages utilize embedded thermoelectric coolers (TECs).  The strong temperature dependence arises from two fundamental properties of the diode itself.  First, as the temperature of the semiconductor varies, it’s gain band shifts up or down, this is known as redshifting and blueshifting.   Secondly, as the temperature increases or decreases so does both the materials index of refraction and its physical volume, causing variations in the optical path length and resulting in changes in the longitudinal mode structure.

For most laser diode applications mounting a TEC at the base of the TO-can, or directly under the laser platform in a 14-pin butterfly package, provides enough temperature stability to produce a stable output.  But, for high-end applications requiring extremely low noise and extremely long coherence lengths, the TEC itself can end up inducing higher frequency noise.

While on the surface this may sound counter-intuitive, when you take a look at how a standard DC switching power supply works, you will see that they inherently generate high-frequency noise due to the large current swings and the internal inductance and capacitance.  In fact, this is the same fundamental principle that most pulse forming networks (PFNs) utilize on a much larger scale to drive the flashlamps in high energy pulsed laser systems.  The diagram below shows a simplified example of a typical switching mode DC power supply, which would be used to drive a TEC. 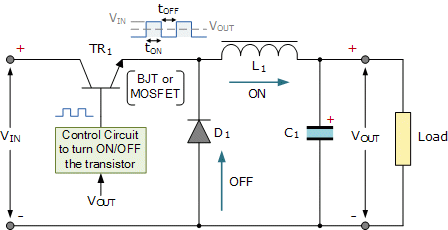 Generally, the noise generated by these TEC drivers has a bandwidth in the MHz frequency range, which again is unnoticeable for most applications, but is right in the “sweet spot” for some long coherence length applications.  For example, if you take a look at the R0638SB0025P single frequency fiber-coupled diode laser, you will see that it has a typical spectral bandwidth of 100kHz.  Therefore, a MHz frequency temperature fluctuation will quickly scramble the laser’s coherence and increase power fluctuations.  At first glance you might think, the solution is simple, use a more stable power supply, but the cost and size of a power supply increase exponentially as the ripple/noise specification goes down.  Besides, most power supplies are only rated to 20MHz.  This industry-standard, which arose from the bandwidth limitations of older oscilloscopes means that even high-end costly power supplies may exhibit higher noise levels in the 100s of megahertz range, which may still be detrimental to the performance of a laser.

It turns out that the most cost-effective solution in many cases is to remove the TEC from the laser package altogether.  Now to clarify, we are not implying that you should give up and let the laser diode run without any temperature control, instead we mean that you should place the TEC on the outside of the laser package increasing the distance and therefore the thermal mass between the TEC and the diode itself.  This process, which is most commonly used with fiber-coupled butterfly packages, results in the fluctuation in thermal gradient homogenizing as it propagates through the material between the TEC and the diode itself.   This same effect has been taken to some pretty extreme cases where a diode can be mounted onto a giant copper block with a TEC attached at the bottom, which is then placed inside of thermally insulated package (with heat extraction from the bottom of the TEC) resulting in micro-Kelvin temperature stability.  This configuration, which is commonly referred to as a “micro-Kalvin oven,” can be used to maintain a kHz level linewidth laser over an extremely long coherence time.

If you would like to get more detailed information on the temperature controllers offered here at RPMC Lasers, click here, or for additional information about our full line up of narrow-linewidth lasers, click here.  As always, you can also talk to one of our laser experts today by calling 1-636-272-7227.