Solid State Lasers and Laser Diodes from RPMC Lasers Inc»RPMC Lasers Blog»Component Blog Posts»Analog vs. digital modulation – Which is better for you?

For people without a background in electrical engineering, understanding the finer details of analog and digital modulation can be quite challenging.  This is compounded by the fact that most texts on the subject already assume that the reader has a working knowledge of linear systems and Fourier analysis, which can be a significant obstacle for most.  Therefore, it is no wonder that one of the most frequently asked questions we get here at RPMC, is “should I use analog or digital modulation?”  As with most things related to laser applications, the answer to this question is, “it depends.”  In this blog post, we are going to tackle the task of explaining the difference between these two modulation modalities in simple layman’s terms while providing examples along the way, which should help you gain a better understanding of which one is better for you.

To start, the first question that you need to ask yourself when choosing a modulation modality is if you are using a single longitudinal mode laser or a multi longitudinal mode laser.  It is virtually impossible for a laser to maintain single-frequency operation under analog modulation.  As previously discussed in our laser fundamentals blogs, the gain band of a laser varies as the drive current is adjusted, which is exactly what you are doing when you use an analog signal to modulate a laser.  While digital modulation is merely turning the laser on and off in rapid succession, i.e., binary either one or zero with nothing in between, analog modulation allows you to fill in those shades of gray in between.  And in these in-between values, there is no way to predict how the gain band will react, resulting in mode hopping and other instabilities. 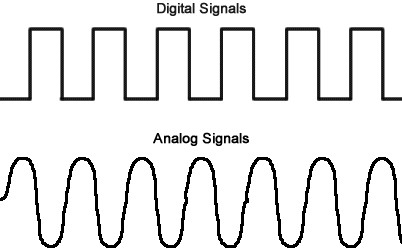 But analog isn’t all bad, and, in many multi longitudinal mode laser diodes, analog can be extremely helpful, allowing you to modulate the signal much more rapidly than in the case of single-mode operation.  Additionally, with analog modulation, you can superimpose any arbitrary waveform on top of the laser signal.  This can be extremely useful for applications which non-binary amplitude modulation is needed.  Another critical advantage of analog modulation is the maximum speed at which the signal can be modulated.  While a detailed explanation of this phenomenon (which would require the use of Fourie analysis) is beyond the scope of this post, the most straightforward answer is to say that there are no “true” square wave signal generators, in fact all waveform generators utilize a superposition of a large number of sine waves to create a square wave.  As such it is far easier and therefore faster for a single sine wave to be generated and processed through the circuitry, than the square wave needed for high-speed digital modulation.

If you would like to get more detailed information on any of the laser diodes offered here at RPMC Lasers, click here, or for additional information about our laser electronics, click here.  As always, you can also talk to one of our laser experts today by calling 1-636-272-7227.